British Columbia Provincial Nominee Program (BCPNP) invited 74 Express Entry candidates in the Tech Pilot draw. This the 2nd Tech Pilot draw for the month of September 2020. The last one was held on September 8, 2020, in which 67 invitations were issued.

British Columbia issues weekly invitation to apply for registrants in the 29 key technology occupations for all Skills Immigration and Express Entry BC Categories.

The BC-PNP categories are managed under a unique system, known as the Skills Immigration Registration System (SIRS). Through the SIRS, registered candidates are assigned a score (out of 200).

Eligible occupations list for the BC PNP Tech Pilot 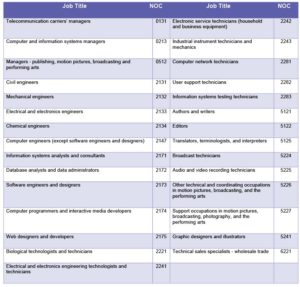 Interested candidates should first apply for nomination to the provincial Government. When they are nominated, they can apply for permanent residence to the Federal Government. Express Entry candidates with a provincial nomination receive an additional 600 points toward their CRS score. As a result of which they are guaranteed to receive an ITA in a subsequent Federal Express Entry draw. The estimated processing time for nomination applications under the Skills Immigration and Express Entry BC is around 2-3 months.

Candidates have up to 30 calendar days to submit a complete application to the BC to be nominated under Provincial Nomination Programs.

Stay informed on our latest news!